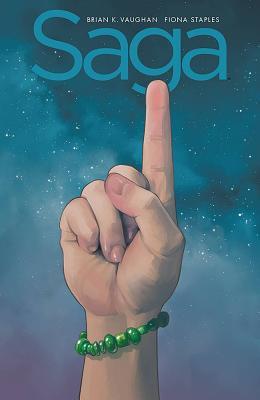 Collecting the first nine volumes of the critically acclaimed, New York Times bestselling series into one massive paperback, this compendium tells the entire story (so far!) of a girl named Hazel and her star-crossed parents. Features over 1,300 pages of gorgeously graphic full-color artwork, including a new cover from Eisner Award-winning SAGA co-creator FIONA STAPLES.

“Once upon a time, each of us was somebody's kid.
Everyone had a father, even if he never provided anything more than his seed.
Everyone had a mother, even if she had to leave us on a stranger's doorstep.
No matter how we're eventually raised, all of our stories begin the exact same way.
They all end the same, too.”

You know those books that reduce you to a blubbering mess and leave you empty because you can't believe it's over (or in this case on a hiatus) and you love the characters so much that it's a little insane and the withdrawal after the book ends is so bad that you're driven to the dark recesses of the internet in search of fanfiction?

Yes, Saga was one of those books.

First of all, I think this compendium is the best way to read this series because:
1. It's way cheaper than buying individual volumes.
2. You can read it one go (which is pretty much the only way you should read it).

At >1200 pages, it's bulky and can possibly be used as a weapon to inflict some serious injury and it's impossible to lug around. But these are minor inconveniences.

Okay, now let me begin by talking about the story. It's unlike any other that I've ever read. Brian K. Vaughn just understands fantasy. It's the kind of fantasy that at the first glance is absolutely ridiculous in its absurdity. There are trees that are basically sentient rocket ships, there are inter-species romances, there are giant eggs in space that hatch to give birth to blackhole like creatures...the list is endless. But everything, absolutely everything, fits together so beautifully. All these crazy things become the new normal as you read on. You see giant sex workers with just heads attached to mile long legs without a torso and you're like, okay, this makes sense.

Secondly, the narration style was sooo captivating. Everything that happens in the book has deep psychological undertones and is totally relatable to our real world at large. The characters were so finely fleshed out that you grow to love them and hate them and root for them.

Last but not the least, the ART! Oh my Merlin, the art! Such breathtaking, beautiful images. Yes, the number of penises and dead bodies is pretty high throughout the series, but then again this is an adult graphic novel. But hats off to Fiona Staples for making me appreciate the guy who has a tv for a face. Not kidding, he has a literal television screen instead of a face. And somehow, as I read on I swear I could see expressions on his blank tv face. Also, Marko is such a hottie! And just when I thought he couldn't get hotter, Fiona Staples gave him a beard.

There are so many things I can gush about but I think the best way to go into this series is to go in blind and be very pleasantly surprised. And this series needs to get out of hiatus asap, because that cliffhanger is EVIL.

Highly recommended for everyone!
Posted by procrastinator135 at 9:46 AM No comments: 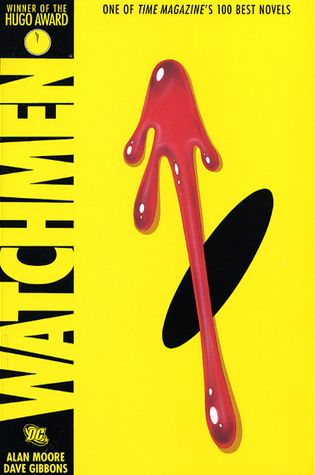 Published 2005 by DC Comics
This Hugo Award-winning graphic novel chronicles the fall from grace of a group of super-heroes plagued by all-too-human failings. Along the way, the concept of the super-hero is dissected as the heroes are stalked by an unknown assassin.

This year I had resolved to read all the graphics novels on the essential graphic novel reading list. That included everything from manga to comic books to graphic memoirs. And so far, I haven't been disappointed at all. In fact, as someone who kind of looked down on the entire concept of graphic novels, it has been quite an intellectual awakening for me. Because there is SO MUCH GOOD STUFF out there!

Watchmen by Alan Moore was naturally on top of the list. The premise itself was so interesting to begin with: dissecting the concept of super heroes, what it means to be a vigilante, do these heroes suffer from the same human failings as common folk do, and who watches these watchmen? It reminded me of the Prime TV show The Boys, where the superheroes are commercialized and are giant assholes who believe that the are not answerable to anyone. Highly recommended show by the way!

But I digress. We're here to talk about Watchmen. Watchmen tells the story of the rise and fall of self proclaimed vigilantes or super heroes in America during the 1940s to 1980s. Mr. Moore cleverly take historical events like the Vietnam War, World War 2, etc and intertwines these events with the involvement of these vigilantes. He presents entirely human reasons which made these people take up crime fighting in the first place - selfish human reasons like power, thrill, adventure, money, publicity. He examines the murky backdrop of the mundane lives of these heroes behind their costumed public figures. He also tells the story of their interpersonal relationships with one another and how this super group is plagued by the same human problems as the rest of us.

The story is very beautifully told through vibrant comic panels, newspaper clippings, excerpts from another comic book inside the story and a retired vigilante's autobiography. The characters are distinctly unlikeable and entirely unforgettable and extremely human. It is a dark, dreary and gory dystopia which somehow feels too close to the truth to be comfortable.

I would highly recommend this brilliant piece of fiction to EVERYONE. And I'll probably go and check out the movie now and crib about how it does not match up to the magic of the book.

“Heard joke once: Man goes to doctor. Says he's depressed. Says life seems harsh and cruel. Says he feels all alone in a threatening world where what lies ahead is vague and uncertain. Doctor says, "Treatment is simple. Great clown Pagliacci is in town tonight. Go and see him. That should pick you up." Man bursts into tears. Says, "But doctor...I am Pagliacci.”


Half a crusading epic, half based in Tolkien-esque mythology, Neil Gaiman's award-winning graphic novel fantasy is now back in a brand-new edition!

Life moves at a leisurely pace in the tiny town of Wall—named after the imposing stone barrier which separates the town from a grassy meadow. Here, young Tristran Thorn has lost his heart to the beautiful Victoria Forester and for the coveted prize of her hand, Tristran vows to retrieve a fallen star and deliver it to his beloved. It is an oath that sends him over the ancient wall and into a world that is dangerous and strange beyond imagining... 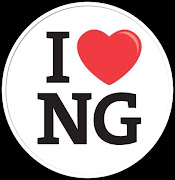